Vikings: War of Clans Giving The Whole Team Something New To Study 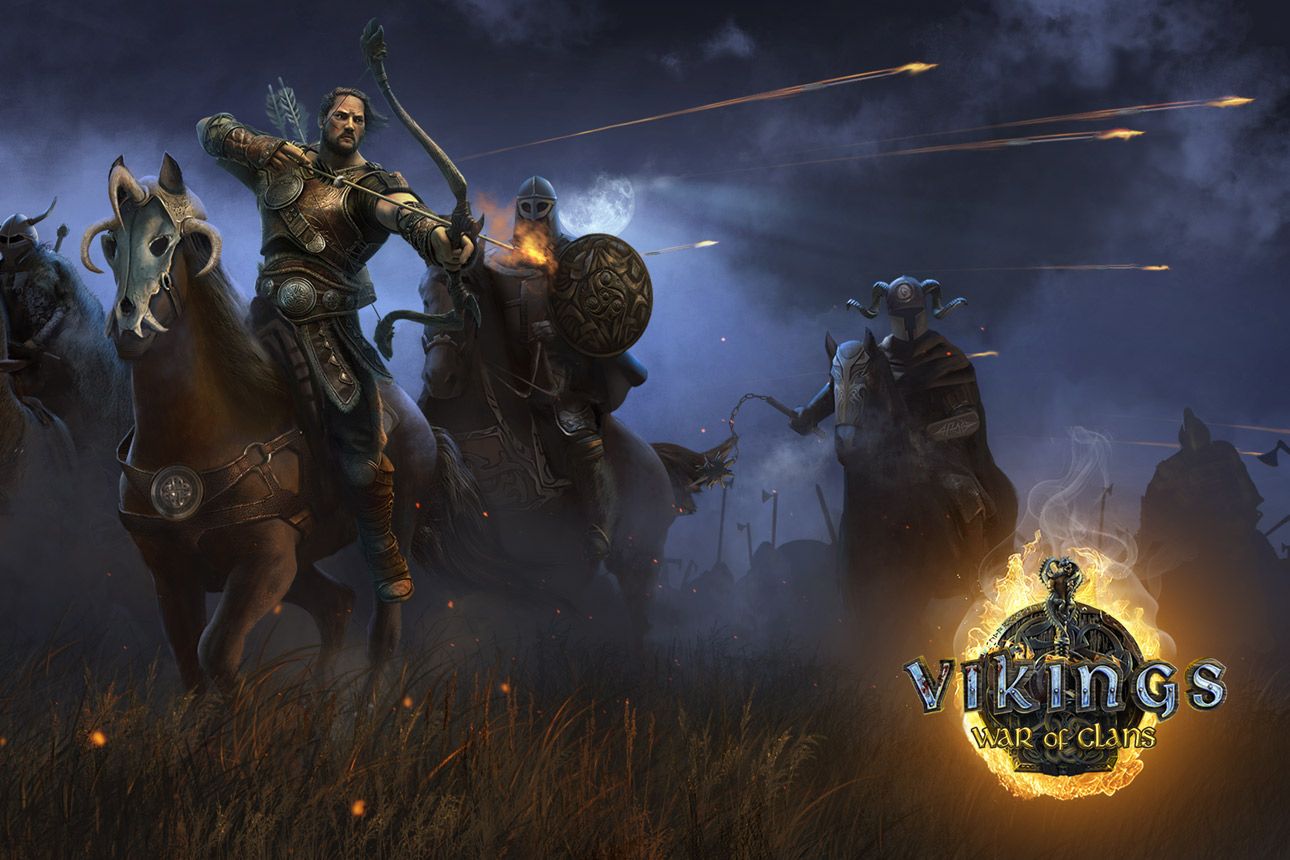 Over the last 10 years the mobile games market has undergone dramatic changes – simple entertainment has turned into a huge industry with its own rules, genres and fan favorites. Our first awkward steps are behind us and the mobile game genre is now taking its rightful place alongside dedicated game consoles.

Plarium has been a part of mobile games scene since its inception. The company was founded seven years ago back in 2009, when the app market was poised to take the world by storm but had yet to flourish. One of the main goals of the Plarium team – from the director to junior employees – is to create quality games for mobile platforms and social networks with a level of depth that isn’t typically expected from mobile games.

Plarium’s headquarters is in Israel, with eight offices and development studios located across Europe and the United States. We also have over a thousand employees, all dedicated to helping the company grow and develop. We reject complacency and embrace new ideas, because every project is an opportunity to become better than the one before it.

This is exactly the case with our creation Vikings: War of Clans, our fastest growing mobile game. It wholly reflects our determination to capture players’ hearts and is the result of a concerted creative effort by a large team of professionals.

How we did it

First and foremost, we wanted the quality of the game to shine through, and for it to be as compelling as possible. We set ourselves the challenge of creating not merely a Viking-themed game, but one that conveyed an atmosphere of honor and pure physicality that is woven through the battles and conquests of that time. Developing this game has been a real adventure for us and the team has loved being immersed in the Viking world.

The process of creating a game setting is often accompanied by a period of tough choices, passionate debates and long discussions – all in search of that “one” idea. This creates a unique atmosphere for each project. 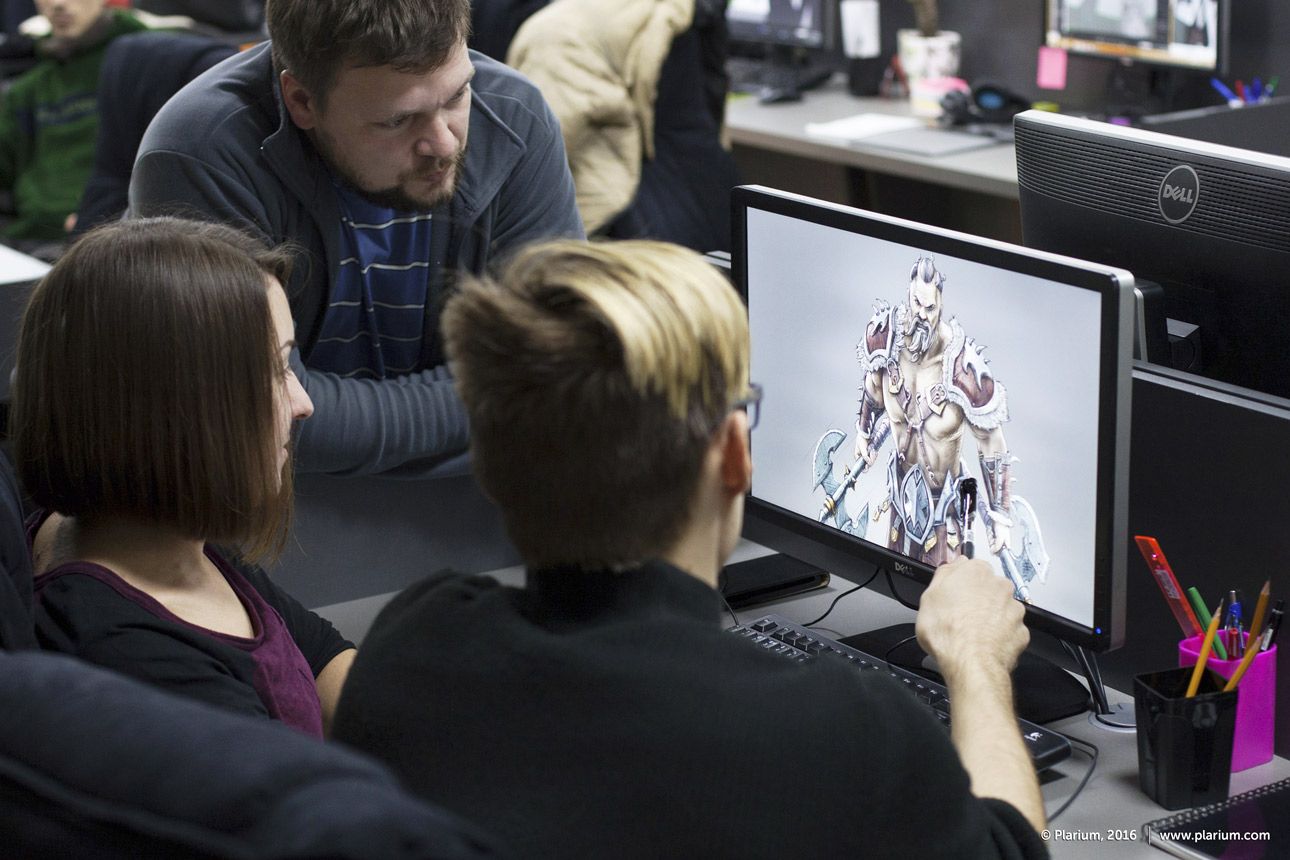 To create a great game setting with a clearly defined story, the first thing you need to do is to learn everything possible about the era. Books, movies and TV shows become faithful friends when devising a concept. What the gamer sees when they play Vikings is only a portion, or tip of the iceberg, of our vast knowledge on the subject. In order to create the kind of immersion and authenticity we desired, it was imperative to learn more than just “what we needed”.

Our desks were often overrun with articles and books on Scandinavian history, while the grim world of wars and battles invaded our minds. TV shows and movies about Norse traditions became our constant companions. The game designers, artists and writers were able to get a real feel for the era, when heroes were forged in cruel battles and loyalty and solidarity were prized more highly than gold. We succeeded in imbuing the game with this atmosphere. 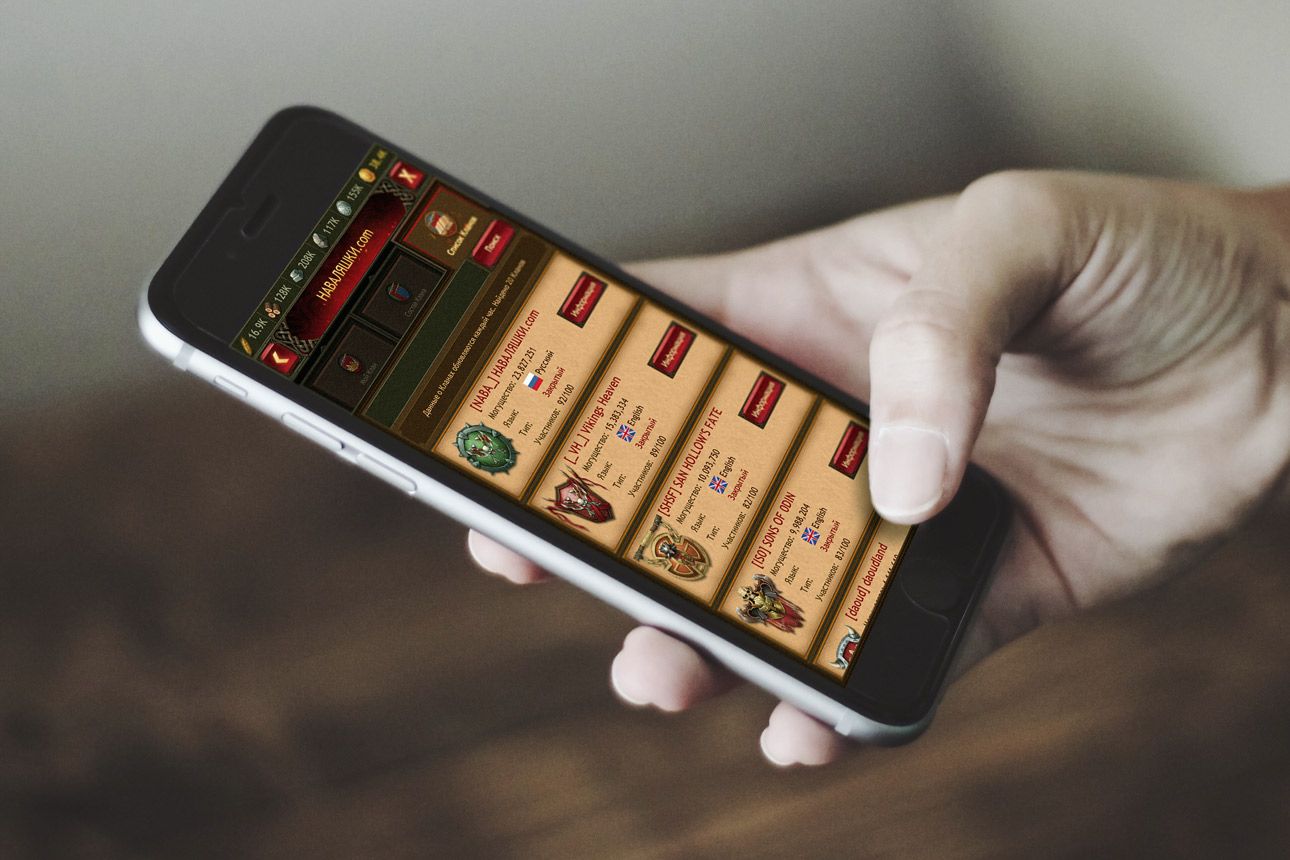 That’s why Vikings: War of Clans is a social game. From our perspective, it couldn’t be anything else. We pay a lot of attention to support, help and cooperation between players within clans because when war rages, and when anyone can become an enemy — the most important thing is friendship.

When developing Vikings, we reached the implementation stage pretty quickly. The main purpose was to create an exciting, vibrant world with bold colors and vivid animation.

In the game, buildings rise up and grow just as the player does. This progress is reflected not only in numbers, but also graphically. Each building in town has to have its own animation, because these locations are full of life. Our task is to create something special that gives the impression of a living, breathing town that awaits the player’s return.

As expected, there were issues along the way. The challenges we have set ourselves require us to constantly improve our knowledge and skill level. Cross-platform game development has its own rules: we have to make the animations beautiful and optimized for different devices and platforms. Creating the world map was also a major part of development. In Vikings: War of Clans we realized the ambitious goal of creating a detailed map with 3D elements. 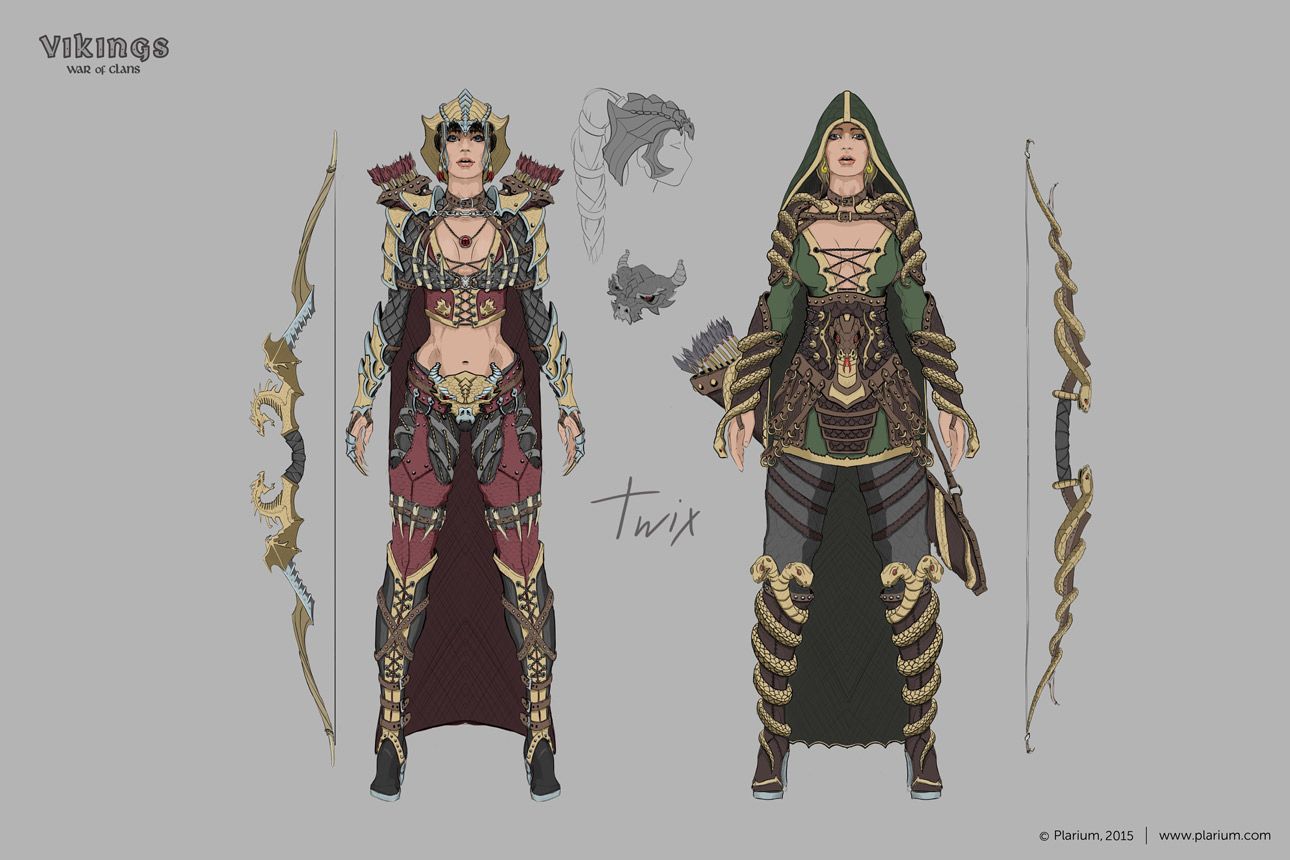 Our artists work hard to create concept art for the kingdoms. They had studied hundreds of photos and real maps, paying attention to terrain in order to depict shores of rocky fjords in precise detail. The artists have to always keep in mind that the map is a very important part of the game where players spend a lot of time. So it’s vital that it is user-friendly and also conveys the spirit of the era.

Each detail of the project is closely scrutinized, which is why we succeeded in faithfully recreating the town buildings and warriors of this brutal age.

Evoking a particular era through words is a true art form – and one where there’s no limit to perfection.

We work hard to create in-game texts that immerse players in this new universe and encourage them to linger there. From the outside, text may not seem like a high-priority game mechanic, but if your text or translation is poor, it is always noticeable, and no amount of slick graphics or addictive gameplay can fix this issue. The effect is similar to an actor who looks as if he played a role badly, when it was actually the fault of the writer. That’s why working on the texts is crucial for us. It reinforces our knowledge of the Viking age and provides a believable experience. We continue to improve our knowledge of the world of the Vikings on a daily basis and weave it into the game in a harmonious and organic way. We painstakingly check everything related to weapons and equipment, as credibility and realism are very important to us.

A good, authentic musical score is a big part of every project. The aim is to create a sound style that fully conveys the game’s tone, inspiring and impressing players while remaining unobtrusive.

We always have our own vision for audio content and our own methods for working out requirements for quality and file size requirements. Yes, in the mobile app industry file size still matters.

The score must be atmospheric and it must reflect the in-game world. The music written for Vikings: War of Clans evokes a longboat floating free. This background music also represents the strength and courage of the Vikings. We have a ritual of the whole team gathering to listen to the completed soundtrack. It often happens that the game soundtrack becomes the soundtrack to the team’s work too, so you often hear this familiar and beautiful music coming from headphones and other devices around the office.

Making a game isn’t only about graphics, coding, text and music, though they are important. Each project is a thorough, precise and time-intensive process of market analysis according to numerous indicators, starting from large-scale game industry market research and up to opinion polls of focus groups, friends and even family members – after all, a true developer is a developer even at home. 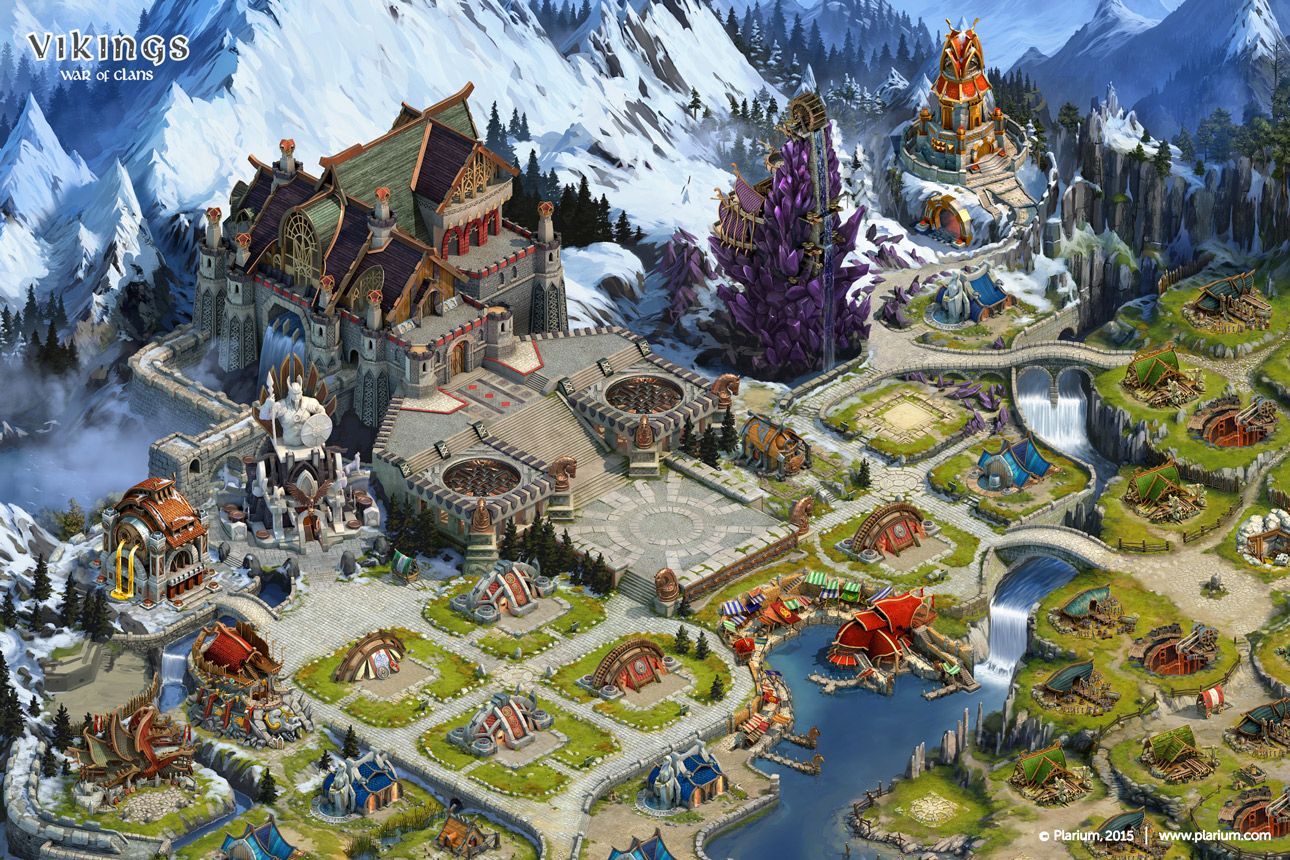 Market analysis across a variety of areas is often a parallel process to development and launch. When conducting market research, you uncover more and more nuances. We look into the specifics of the question and gaps in the market, analyzing and studying all the available sources of information to add new concepts to the project. This thorough approach allows us to continuously seek out new ideas and opportunities without allowing ourselves to get too comfortable and rest on our laurels.

First, we developed the game so that players can continuously grow both on their own or with others (single or clan game). The game features a clan system where users unite their forces in order to survive in the harsh world of the Vikings. Our task is to create a system that allows players to communicate and help each other seamlessly without taking them away from the immersion of the battle for too long.

The social aspect is equally important outside the game. In each of our new titles, we remember the importance of feedback and supporting players to keep our users engaged. Every player means a lot to us. That’s why we have a large support department that listens to the users and quickly gives them feedback on any questions they may have. After all, sometimes dedication is synonymous to less tolerance when a game issue crops up. We must always meet players’ expectations, which is why we regularly release updates with fixes as well as new elements, additions and constant improvements of the game mechanics and balance.

The world of the Vikings doesn’t stand still. It grows, develops and improves. We hope our tireless efforts will allow everyone to experience the honest and harsh world of the Vikings, where beyond the cruel battles and chaos lies the other face of war – the unbreakable support of fellow clansmen.