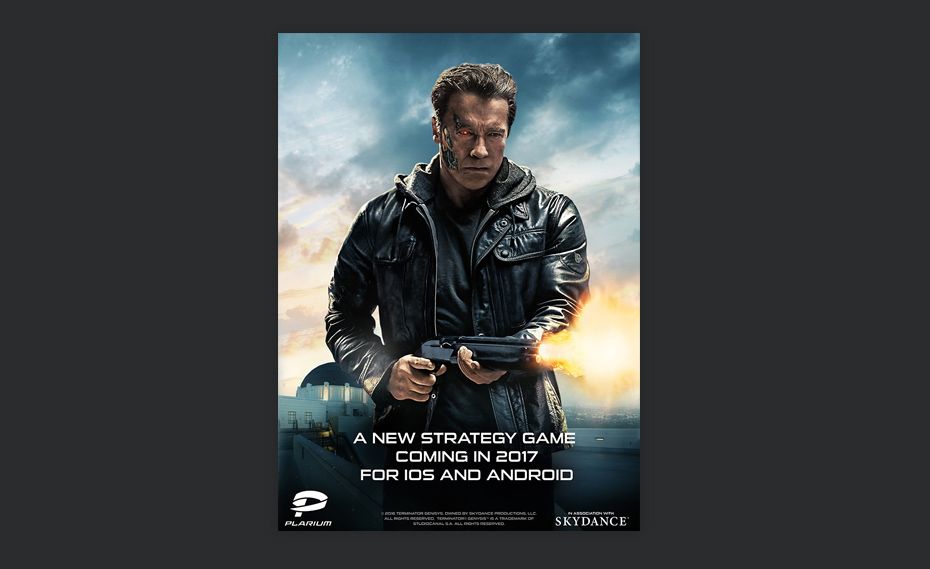 TEL AVIV, ISRAEL AND SANTA MONICA, CA – June 28, 2016 – Plarium, one of the fastest growing developers of mobile, social and web-based games with over 250 million users, today announced a partnership with Skydance for the rights to develop a Terminator Genisys™ mobile game for iOS and Android. The clan-based massively multiplayer online (MMO) mobile strategy game will pull from the themes, experiences and character likenesses from the latest entry in the Terminator franchise. The free to play game will be available worldwide early in 2017.

“Mobile games have incredible potential to expand the universe of characters and experiences we have created for a movie and provide audiences and fans with a brand new perspective on our content,” said Jesse Sisgold, Chief Operating Officer at Skydance Media. “Plarium has had great success in creating state-of-the-art MMO titles and we look forward to working with them to bring our Terminator franchise to mobile devices in highly engaging new ways.”

Terminator Genisys was the fifth installment of the franchise, presented by Paramount Pictures and Skydance. When John Connor (Jason Clarke), leader of the human resistance, sends Sgt. Kyle Reese (Jai Courtney) back to 1984 to protect Sarah Connor (Emilia Clarke) and safeguard the future, an unexpected turn of events creates a fractured timeline. Now, Sgt. Reese finds himself in a new and unfamiliar version of the past, where he is faced with unlikely allies, including the Guardian (Arnold Schwarzenegger), dangerous new enemies, and an unexpected new mission: to reset the future.

This new game will follow the struggles of The Resistance, whose soldiers are in a state of civil war over the few resources and weapons that remain. Players start the game as the machines begin to wake up … but this time, without central command to dictate their actions. Players will have the option to lead a Resistance Commander or Skynet Command Node as the war between machine and man continues.

“We all grew up on the Terminator franchise as kids, and bringing the essence of Terminator Genisys to a game together with the innovative team at Skydance is a great aspiration we took on”, said Leonard Frankel, Head of Business Development for Plarium. “In this game we will call upon our players to pick sides and make history: help humanity prevail or crush it. This will be Epic!”

This partnership is the first of its kind between Plarium and Skydance Media. Plarium’s previous titles include “Vikings: War of Clans”, “Stormfall: Rise of Balur”, “Total Domination: Reborn”. For more information, please visit: plarium.com.

Founded in 2009, Plarium Global Ltd. is dedicated to creating the best mobile and social experience for hardcore gamers worldwide. With over 250 million registered users, we’re proud to be consistently ranked among Facebook’s top hardcore game developers. Plarium employs more than 1000 individuals and is headquartered in Israel with eight offices and development studios across Europe and the United States. Our hardcore mobile and social games are available on all major social networks, including Facebook, Vkontakte, Odnoklassniki and Mail.ru, as well as web browsers, iOS and Android.

BloodyDisgusting: ‘Terminator’ Rises Next Year On iOS and Android.