In this article we will show you how “Champions IRL” (in real life), a cinematic series that gained almost 4 million combined views on YouTube, was created. We will also describe the visual effects (VFX) we used in detail. By breaking down each video, we will demonstrate all the stages of working on these effects and tell you what went on behind the scenes.

From storyboarding to the release of videos across our sites, all stages of cinematic production at Plarium are closely interconnected. Many people are involved in the process: the video production team, creative writers, audio designers, marketers, localizers, an external production team, and actors. In this video series, we use many new techniques during our process to get it just right!

How the “Champions IRL” series was created

From covert shooting to mockumentary

Initially, the videos were going to have a “hidden camera” concept. The scripts were funny but we found it difficult to make our Champions come alive with all their charisma, facial expressions, gestures and emotions.

Instead, we decided to transform the concept into a “mockumentary”. In this pseudo-documentary format, we could show how the characters from the game universe get on with ordinary people and try to master new professions. But this presented a challenge.

Incorporating Invisible VFX into the environment

The Champions of RAID have fantastical abilities which, in our world, would be amazing and strange to behold. But how could we represent their effects on the environment in a way that made it seem like they were really happening? The Video Production Department landed on a solution: Invisible VFX.

This style of VFX blurs the line between practical and visual effects and is designed to make the viewer believe that everything they are seeing is part of the same scene. By using Invisible VFX for the environments in the video, we could make it more natural looking and make our “mockumentary” concept work.

Below we will show examples of Invisible VFX at work in the physical environments we filmed in, and talk about how each video in the series was created. Let's go!

For this video, we turned an ordinary Kyiv gas station into a Californian one.

The VFX artists took a 3D scan of the location. This allowed them to add palm trees to the window reflections, while the background was green screened and remade in post-production.

We also developed the visual identity of the non-existent company OCG Petroleum. Before filming, we decorated the gas station in its corporate colors and put up banners with its logo.

A real car was used to film the section where the barbarian Turvold sits on a roof. Several people rocked the car from behind, and the hood, glass, and Champion were added in post-production. It was important to synchronize the effects with the movement of the car so that they went unnoticed by the viewer.

As a little aside, we planned to film the 3D scan of the location using a drone but we couldn’t launch it! It turned out that the gas station is located in the no-fly zone near the airport in Kyiv. This meant that the VFX supervisors had to shoot every corner of the site by hand.

The film shoot for this video took place in one of the supermarkets in Kyiv. To make it look like an American store, the production designers replaced all the signs and labels in half of the supermarket. It took them more than 6 hours!

In order for the sheet of fire that flies out of Zargala's ax to cast realistic light, we attached an electric lamp to a long metal beam. Using this, the crew could easily turn the lamp on and dangle it over the extras. Then, in post-production, they added the fire and synchronized it as closely as possible with the real light cast by the lamp and the reactions of the actors below.

And, yes, the piece of meat that Zargala throws into the cart was real too. It weighed more than 70 kilograms and, in order to shoot it for real, the production assistants on the set had to throw it into frame themselves.

This video was filmed in a gym that turned out to be so big there wasn't enough light for the background. Our VFX artists had to recreate a 3D model of the gym hall in post-production, adding light and depth.

To film the guy falling from the treadmill, a special rig and mats were set up. A stuntman was then brought in to throw himself backwards. 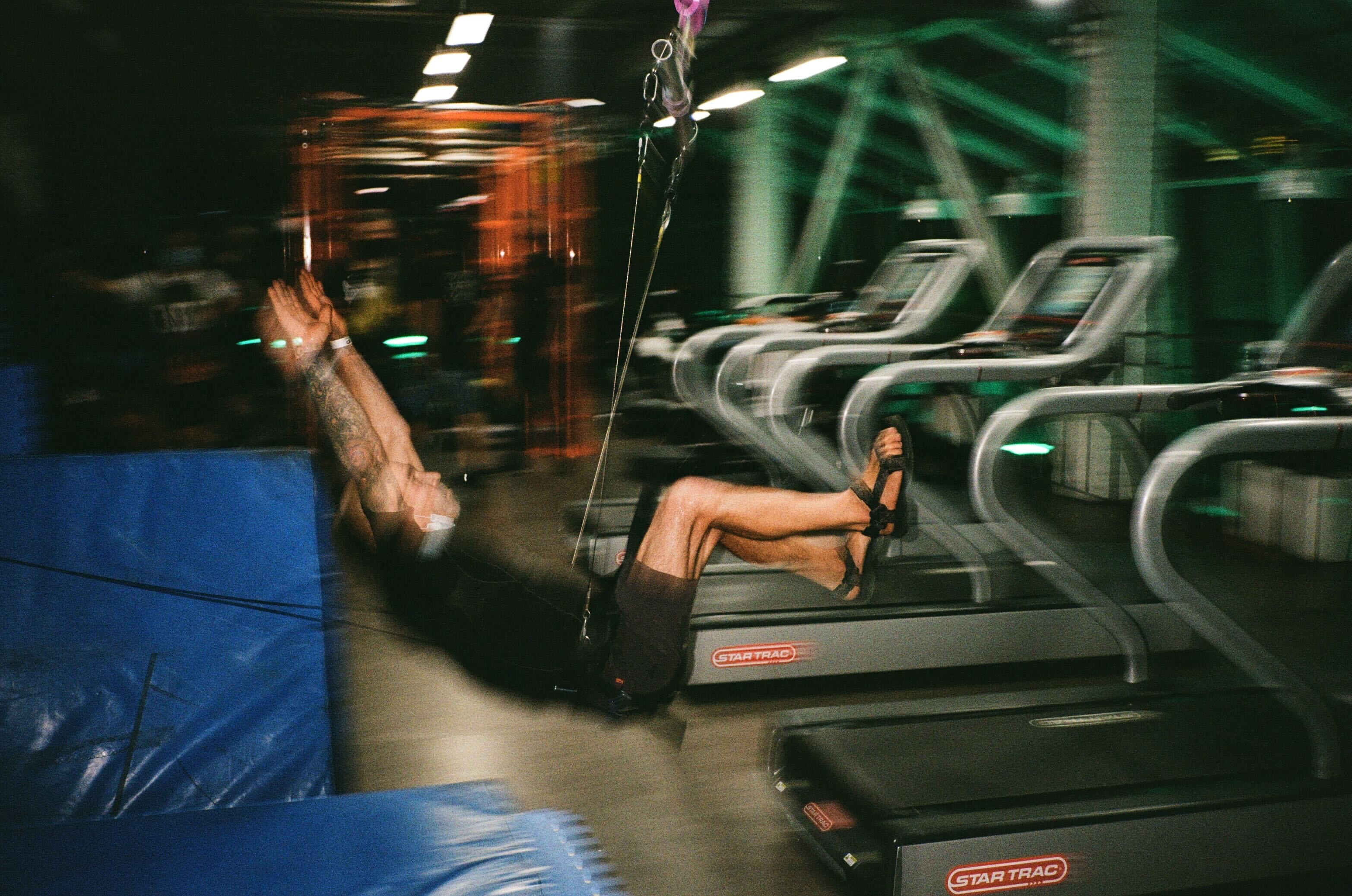 Incidentally, the stuntman accidentally got caught on camera when we were filming the first scene. If you watch, you can see him filming the action on set with his phone. However, we decided to leave this in the final edit, as it seemed realistic that a normal guy who came to the gym would want to film someone with an unusual training buddy! How could you not want to film Norog on your phone if you saw him in real life?

During post-production of the scene where Norog throws the ball at the actor, we had to recreate the throw correctly from a physics point of view. To make the ball fly and bounce plausibly, the team tried different sizes. A small fitness ball wouldn't throw the main character off the treadmill and a basketball might fly back into Norog. As a result, we settled on a medicine ball which the Champion spins on his finger before hurling.

Lava Knight would be about 3 meters tall in our world, so we had to find a kitchen with a high enough ceiling to film this video. In order for him to be able to interact with the actor, he had to be seated on a stool in one of the scenes too.

For this video, we created the brand identity of a non-existent pizzeria chain. We developed a uniform for the employees, made signs, and even printed out a menu.

Invisible VFX was used in the shots where Lava Knight hits the table with his spiked flail. The foreground was accurately recreated and replaced in post-production. 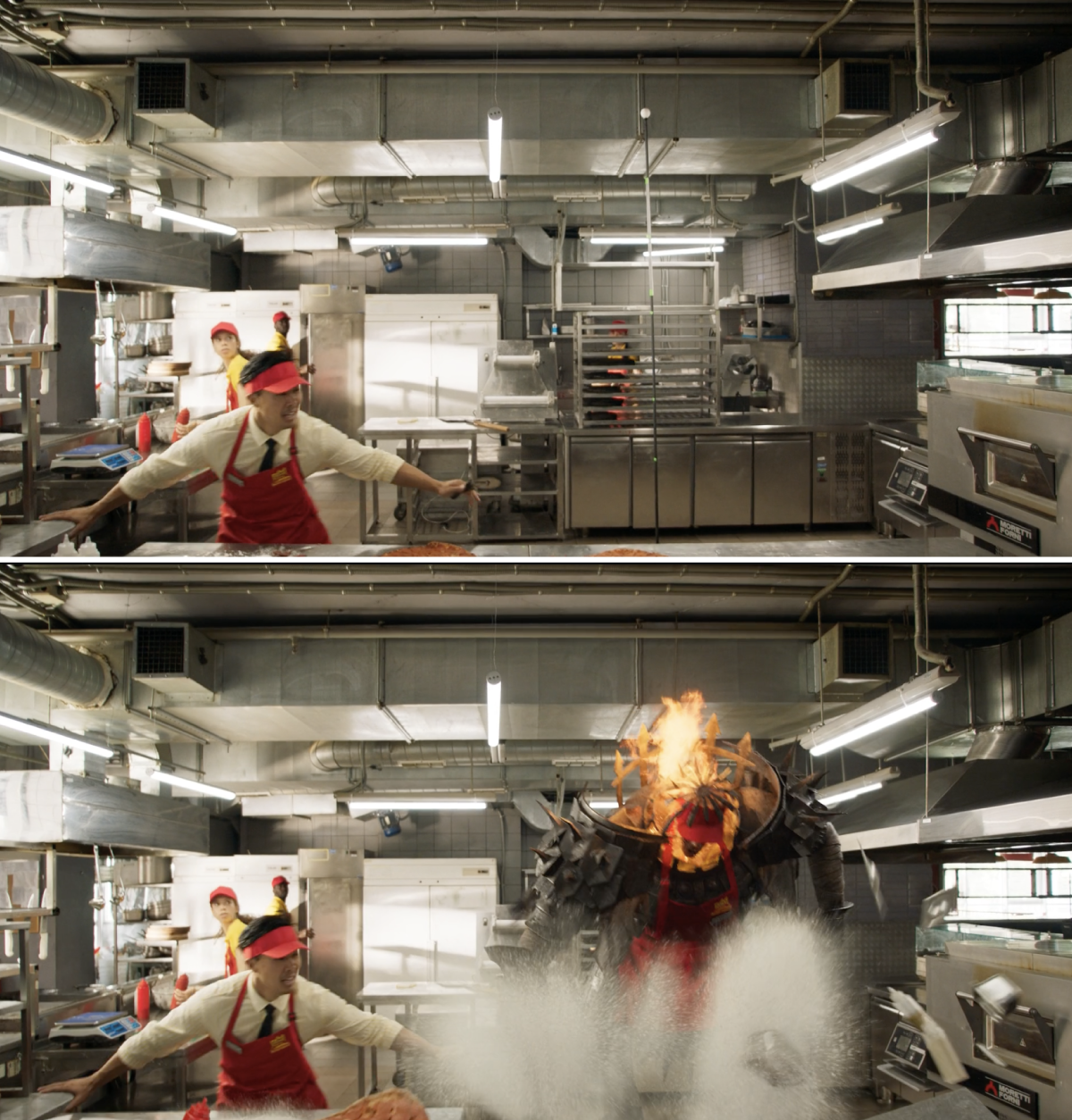 It would have taken at least 10 tables to shoot the moment in live action when the table breaks and flour flies into the air. Our team would have been constantly replacing tables and flour. Instead, the VFX artists modeled the objects that were on the table in 3D and developed a flying flour effect so we wouldn’t have to do any of it physically.

To make Lava Knight's voice so sinister, the audio designers used layering techniques. The recorded voice of the actor was stratified into many copies, processed, and then connected together again.

This is just a little of what went on behind the scenes of filming our “Champions IRL” series. Watch the video below to find out more!

Subscribe to our Vimeo and stay tuned for our next cinematics!